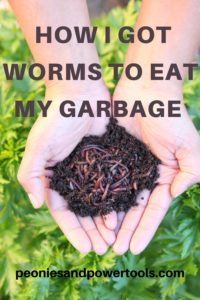 Many decades ago, when I was a young girl, I became the country’s first-ever recycler.  Just kidding, but it was the sixties and I took my concern for the environment seriously.  I dragged my cans and bottles to a recycling center, made clothes, grew vegetables and started a compost pile. Composting is an aerobic (requiring air) method of decomposing and recycling organic solid wastes.  The resulting humus-like material, known as compost, is a good (the best!) fertilizer for plants.  So, naturally, when I heard about vermicomposting, the addition of worms, I was all in.  What could be better than having worms that would eat my garbage?

My first worm bin was a simple affair that I made out of 2 plastic storage totes for about $10.  This is how to do it: 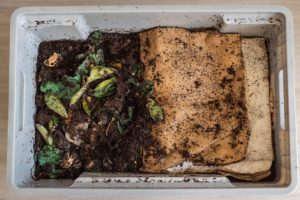 I participate in select affiliate advertising programs. This means that if you make a purchase through certain links on this site I may make a commission from that purchase. All opinions are my own, and all brands included are those I personally like and recommend. Thank you for your support! 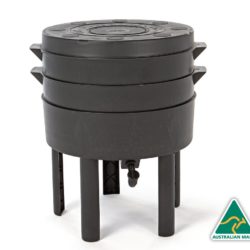 My worms and I love this new bin, the Can-O-Worms.  You can purchase it at Uncle Jim’s Worm Farm, in the outdoor composters section.

Just like my first DIY worm bin, this is very easy to use.  It has 3 removable bins and a bottom bin for drainage.  You start your worms in the lowest removable bin just like I described above with my DIY bin.  When that layer gets full, stop feeding the worms until they have eaten all their food and are looking for more.  You want them to be hungry!

Add the next layer, with bedding, making sure that the worms can reach it.  It needs to be touching the material in the lower level.  They can’t jump!  Once all the worms have moved up, you may harvest the compost below, or you may leave it for the future.

When all 3 layers are full, you’ll need to empty the bottom bin, harvest the compost, and put that bin on top.  So easy!

Be sure to drain the system often by opening the handy spigot at the bottom.  This is really important!  I sadly let my system get too wet at one point and my poor worms drowned.  Now I leave the spigot in the open position at all times with a collection bucket under it.

If you find that you are getting a lot of drainage, your bin is probably too wet.  You may be feeding the worms more than they can eat.  Cut back on food, cut out liquids altogether (I never add any to mine), and add more bedding.

A word about the liquid that is draining out the bottom of the system.  This is not worm tea!  There seems to be some confusion on this topic.  The drainage is “leachate”, not worm tea.  During decomposition, liquid waste is released from the cell structure of the food scraps. This liquid or leachate seeps down through the worm composter into the collection area. It can contain harmful pathogens because it hasn’t been processed and cleaned through the worms intestinal tract and should not be used on edible garden plants.  This is strong and toxic stuff.

How to use leachate: If you would like to use it on non-edible plants, dilute it this way; 1 tablespoon leachate to 1 gallon water.  That’s right, really dilute!  I have killed plants with a solution any stronger..

How to make worm tea: best explanation I have found (from Uncle Jim’s Worm Farm)

Worm tea is ultimately the end result of steeping worm castings or vermicompost in water. It is known mostly for its ability to boost microbiological activity in soil by adding bacteria, fungi, actinomycetes, and protozoa to the soil. If you are already worm farming and have easy access to worm castings then making worm tea will be a breeze, or if you want to start a worm farm to reap the benefits of the castings we have you covered with our many options of worm kits.

Things you will need to make worm tea:

The first thing you will want to do is add your worm castings to the porous bag of your choice and tie the end of the bag. Place the bag of castings in your container of water and let it steep overnight. In the morning the water should be light brown and that water is your worm tea! After the bag of castings is ‘spent’, you can add it to a potted plant or to your garden because it has finished its tea-making job. Ultimately, to make a batch of basic compost tea with worm castings, all you really need to do is soak some vermicompost overnight in water.

Now that you have your worm tea brewed let’s talk about how to use it.  If you have a large garden or many houseplants, worm compost tea can be diluted with water to cover more area. Y

ou simply take 50% water to 50% worm tea. I suggest putting your worm tea in a watering can, however, a sprayer or spray bottle works well too. Just be sure to strain the worm tea before adding it to a spray bottle. Now simply water your house plants, outdoor potted or hanging plants, and garden. Cover a whole plant with worm compost tea including the leaves. Many people believe that the beneficial microbes in worm tea help protect plants from diseases.

And that is it! Now you know how easy it is to make worm tea. It is just one of many great benefits to having your own little worm farm. Your plants will especially thank you!

I bought my third bin, the Hungry Bin Flow-Through Worm Farm, simply to make my life a bit easier.  The full layers of my Can-O-Worms were getting too heavy for me to lift, now that I am alone, and I had to wait for a strong guy to come along.  Asking a guy to help me with my worms wasn’t a question I wanted to ask just anyone.  Ha!

With the Hungry Bin, I never have to lift anything!  I just put the food on the top and take the castings out of the bottom!  It’s really flow-through!  You can find it at Uncle Jim’s, in the outdoor composters section. 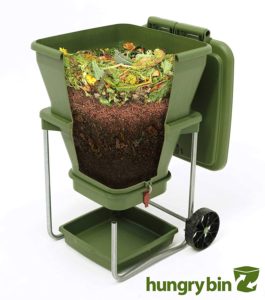 I now have both of these worm habitats in my garage and I have plenty of room for a ton of worms.  They seem quite content to eat my garbage and garbage from my neighbors too!

My email address may be “weddinglady” but people now know me as “worm lady” too!  Strange but true.