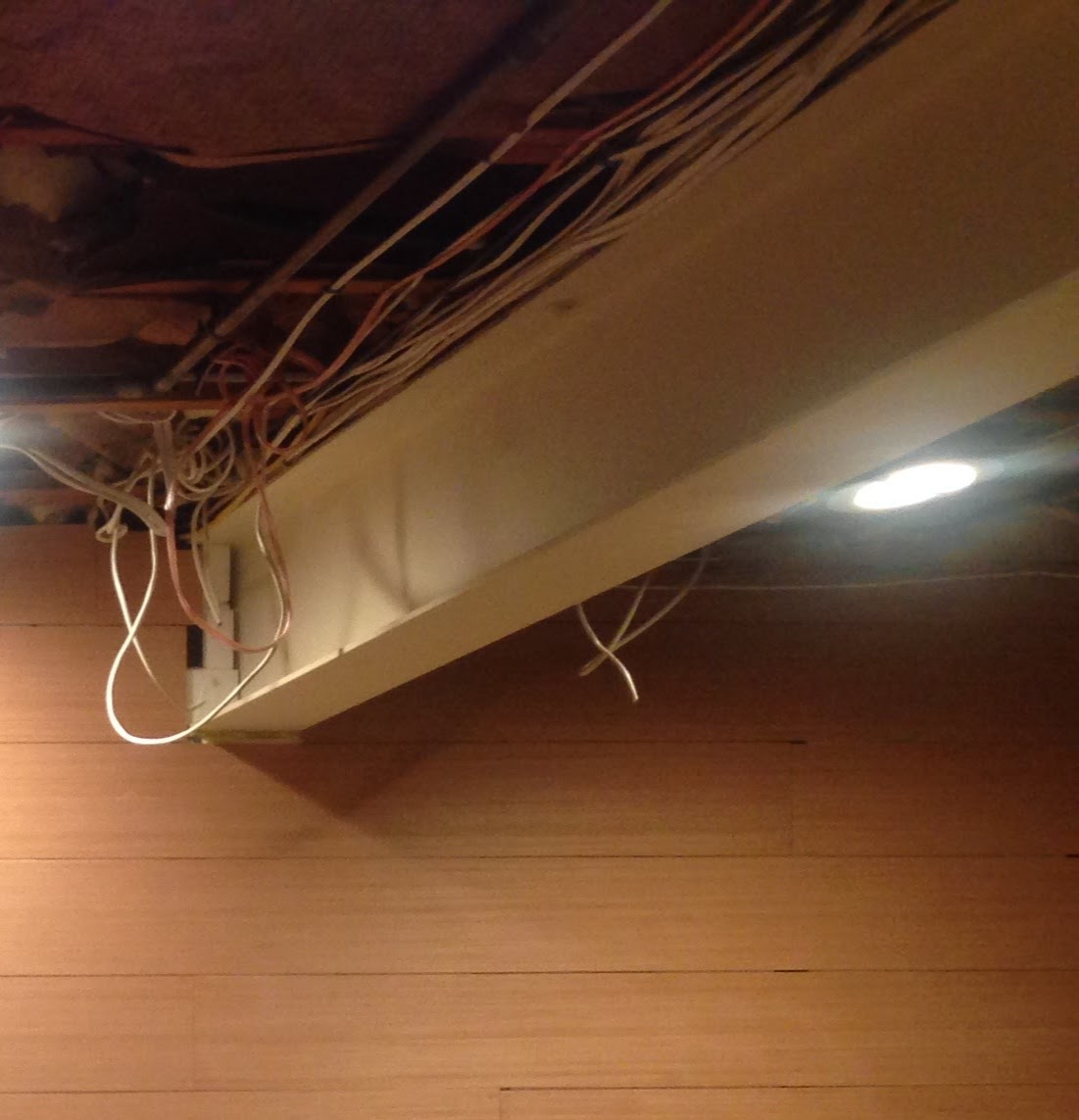 The ceiling in my basement was quite horrible.  Not only did it have a crazy amount of wires hanging down loosely, and pipes, of course, but it had a massive steel I-beam running right down the middle of it.  My husband actually admired that I-beam and wanted to showcase it.  Hmmm…. not my style at all.  Now that I am working solo, I had to cover it up.  How to enclose that ugly I-beam in my basement ceiling? 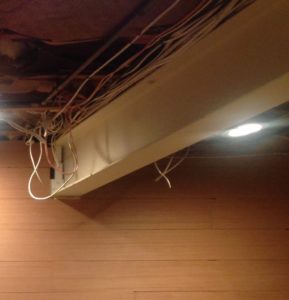 What Is An I-Beam And Why Did They Put It In My House?

An I-beam, also known as H-beam, W-beam, universal beam, rolled steel joist, or double-T, is a beam with an I or H-shaped cross-section. These beams are all slightly different, but I am going to call them all “I-beams.”  The horizontal elements of the I- beam are flanges, and the vertical element is the “web”.  I-beams are usually made of structural steel and are used in all kinds of construction.  There is a very cool video here showing how the shape of an I-beam makes it very strong.

Short History of the Steel I-Beam

Believe it or not, it all started when the Great Chicago Fire of 1871 destroyed thousands of wooden buildings.  After the fire, Chicago responded by creating stricter building codes and requiring non-combustible construction materials.  By then, the I beam had been developed by the engineer, Alphonse Halbou.  As the city grew, Chicago needed to look to steel construction to go upward.  The world’s first all-steel framed skyscraper, the Rand McNally building, constructed in Chicago in 1889, gave the I-beam the perfect opportunity to show its strength.

The Common Way of Enclosing An I Beam

From what I had read, the accepted way to enclose a steel I beam was to build a soffit around it.  What is a soffit?  A soffit is basically any finishing material, such as wood or sheetrock, that is installed to cover the underside or visible side of a beam or other structural element that you’d like to hide. This is done by building two ladder-like structures, one to go on either side of the beam, and connecting them on the underside.  Once you have constructed this soffit or frame, you can cover it with sheetrock, wood, or whatever material you like.  There is a good video showing in detail how that is done.  Watch it here.

So that is what I expected to do.  HOWEVER… when I looked at the length of my I beam, which is 24 feet, and realized how heavy and cumbersome that would be for me to handle, I figured there had to be a better way.

My Way of Enclosing the Beam

An inspiration came to me and I thought a good way would be to take a piece of scrap wood, cut it to size to fit within the width of the flange of the beam (4 inches), and pound it in there real snug so that I could attach some kind of sheathing to it.  I used a piece of 2 by 4 and used a hammer to bang it in.  Low and behold, I found a video of a carpenter who did just that!  Amazing.  Got to love Bernie and his wonderful accent.  Watch him here. I did exactly what Bernie did except that I added construction adhesive to the 3 edges of the 2X4 that were touching the beam.  Probably overkill, but I wanted to be sure it would stay forever. 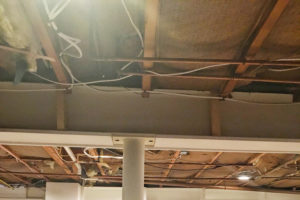 What Material To Use To Cover The Beam

When it comes to covering the beam with material, there are many choices.  Bernie used 2 layers of sheetrock.  I have also seen hardwood flooring, lumber, and faux pre-fabricated beam covers among other materials.  My way was far simpler.  I bought PVC boards to cover it.

Why I Chose PVC Boards

PVC boards have many advantages:

All in all, very easy and low maintenance.  No sanding!

I purchased (at Lowes):

I was able to get these boards into my car, with help from the Lowes guys, taking up the entire space from front to back plus some, and avoided the delivery fee.

How I Constructed the Box

The first thing I did was to attach the narrower pieces of PVC to the underside of the beam with construction adhesive. 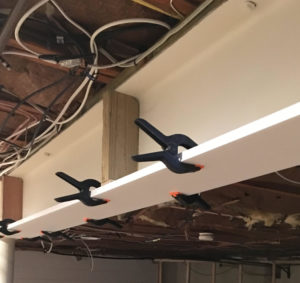 I held it up with lots of clamps.  That was the easy part.  The wider pieces of PVC were much heavier.  I positioned 2 six-foot step ladders under the beam where I wanted to place one of the PVC side pieces.  Then I lifted the big (giant) PVC board on top of the ladders.  I lifted one end up and tried to hold it while I nailed it into one of the blocks I had pounded into the I beam.

Then I got off the ladder and called a friend to help.

My friend held one end and I held the other and, between us, we nailed the board onto the blocks.  And then the 3 others. 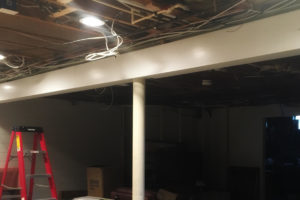 Now what to do with the ceiling?

The one thing I was sure of was that I needed access to the plumbing and electrical.  I needed to have some sort of suspended ceiling.  In my dream, I was going to hang my own ceiling grid and fill it with lightweight beadboard.  Rob from ourpinterestingfamily.blogspot.com did it and his ceiling looks gorgeous!  See how he did it. 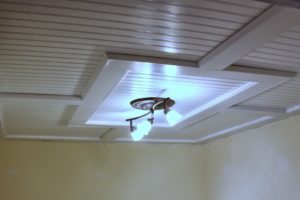 Isn’t that a beautiful job?  That’s exactly what I wanted!

Then I woke up from my dream and realized that, while I could do a lot of things, I could not do that.  I know my limitations.  So sad, though.

So I broke down and hired a ceiling contractor to put in a suspended ceiling.  It’s not beautiful, but it covers up the pipes and wires and makes the room look finished. 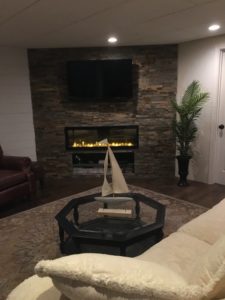