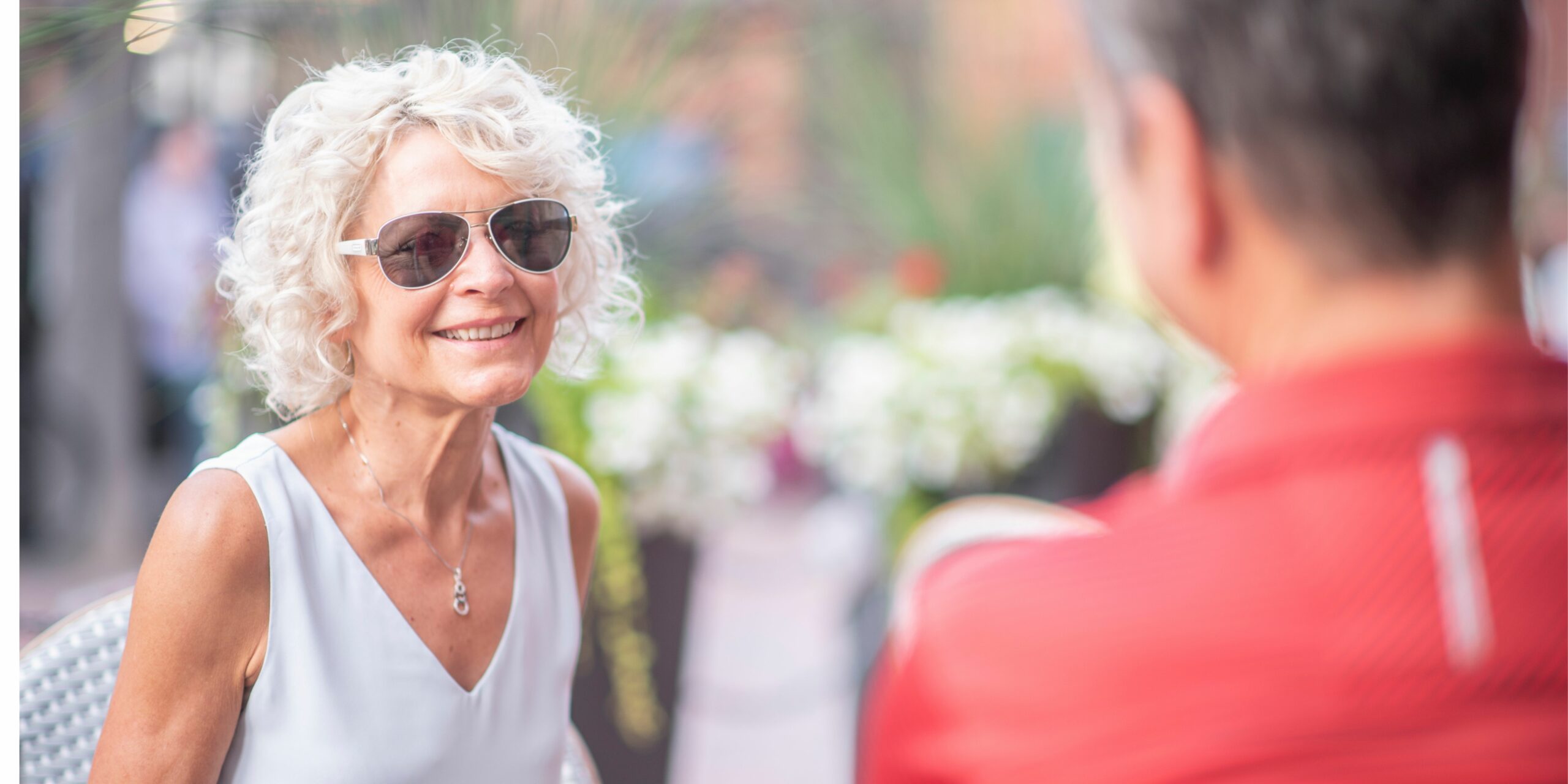 Hello ladies!  I have been dating for several years now and I’ve had this idea knocking around in my head that I should write a guide to let you all take advantage of the lessons I have learned through experience.  I am not a dating expert by any stretch of the imagination, but dating can be a scary experience if you’ve been out of the loop for a while, or decades like I had.  So here it is,  My Ultimate Widow Dating Guide.

When To Start Dating

I have been a widow for 5 years.  Since January of 2016.  Four months later I started to date.

Some people thought so.

But you know what?  The only person who counted in making that decision was me.

Did I still love my husband?  Of course, I did.  I met him when I was 16 and was married to him for 48 years  Ups and downs, like all marriages.

But guess what?  He was gone and I was not. I wanted to make new friends, I wanted to feel more alive and not just wait around until my life magically got better, or ended.  Did anyone else know what that felt like?

No.  This is a very personal decision.

Start dating when you are ready.

Why Dating As A Widow Is Hard I heard a rumor that men now expect sex by the third date.  That can’t be true, right?  I remember a really great date, a music venue, and dinner.  Afterward, my date announced that he deserved sex after that great date.  It was my third and last date with him.  I realized dating was going to be a shock to my system.

If I could survive the heartbreak of losing my husband, I could be brave enough to take this risk.  I either take a risk or be safe in the same place forever. Wishin’ and hopin’ were not going to make it happen.

So I took the plunge and joined a dating site.  Now honestly, my kids were not happy about it and I completely understood.  They were still grieving their father and they worried that their poor mother would be taken advantage of.  But they had their own lives to live and I had to find my own way.

I did lots of research before joining a dating site.  I learned that most dating sites have both free and paid options.  What I discovered is that men who are serious about finding a relationship are willing to pay the money for the paid version.  If a dating site is totally free, skip it altogether.  That’s where you’ll find scammers, “players” and nutcases of all kinds.

What is a Scammer? This is the definition of a romance scammer according to the FBI:

Romance scams occur when a criminal adopts a fake online identity to gain a victim’s affection and trust. The scammer then uses the illusion of a romantic or close relationship to manipulate and/or steal from the victim.

Remember, these people have done their research carefully and have tailored their profiles to match yours.  This is called “catfishing.”  So cruel.  I came across a few of them.  Luckily I recognized their fakeness before they had a chance to ask me for money.  Some clues:

Most legitimate websites have anti-scam mechanisms and make members verify their pictures.  However, even after that, if someone seems sketchy, move on.

What is a Player? The Urban Dictionary definition of a player is:

Usually a boy (guy) makes you feel special. He makes you feel like you are the only girl in his life, when really you are just one in 100. They flirt with other people, not just you. He talks to you all day, then the next day they ignores you. They send you mixed messages, and you’re not sure whether he likes you or not? You can’t keep your mind off him, even though you know you’re nothing to him.

Yeah, OK, that must have been written by a guy.  If you want to know the real definition of a “player,” ask a woman.

A player is a guy who acts as if he cares about you but what he really cares about is his own ego and his own pleasure (getting laid).  After he accomplishes his goal he moves on to his next conquest.

If he says “I think we should see other people,” believe him.  The relationship is over.  Move on.  He is dead to you.  Seriously, you don’t need him.  Find someone who has values that match your high values.

There is another category of men who aren’t necessarily players but let’s call them time-wasters.  If you have been dating a guy for a period of time and he is indefinite about the relationship, he probably has no desire to make it long-term.  And if he says these words:

“I’m not looking for anything serious right now,”  I don’t care what excuse he uses, believe him and get out!

What is a nutcase? Everybody’s idea of a “nutcase” is different, but if a guy is into stuff that you think is weird, move on.  Believe me, I met a lot of them.

Which Dating Site To Join

There are plenty of legitimate online dating websites to choose from out there.  Here are a few:

I ultimately decided on Match.com (I tried others too) because it’s been in business the longest amount of time and has the best reputation.  There, I found the profiles and pictures of the men quite adequate most of the time, and, as it’s a paid site, I found the guys were serious, not players.  Play around with the different sites and see which one fits your style.

A word about the pictures men choose for their profiles…please show me a nice picture of what you look like now.  This is what I don’t care to see: Men…if you want a date with a nice woman, go to the trouble to post a nice picture.  That goes for you too, ladies. My first dates were pretty bad.  You’d think after all the research I’d done, I would have figured out how to find a nice gentleman fairly quickly.  Nope.  How can you expect to find the man you’re looking for if you don’t know what that is?  Figuring this out takes some time.  Take it.  Be patient.  The filters included in the websites do include some basics:

I filled out my profile, filled in my parameters, and let it rip.  My matches were on their way.  Yay!  And this is what I got:

So when I got an actual message from an actual man showing interest, I was pumped.  Coffee?  Sure. When I arrived at the coffee shop, the very nice gentleman met me at the door with his golf cap in hand.  So far, so good.

At the table, we ordered our coffee and spent a few minutes talking golf.  After about 5 minutes he started to cry, explaining that after his stroke he no longer had control over his emotions.  OK.

I am a nice person with sympathy for others.  But this was not a person I wanted to date.  Not wanting to lead him on, I told him right away that I didn’t think we were a good match.

He cried harder.  After that, there were a few days where he begged, making me feel horrible until I finally blocked him from the site.  You can do that.

My next several dates were better, but it was clear that I needed to be more selective.  I hated having to give the “you and I are not a good match” speech.  Even though I tried very hard to do it nicely.

I had some pleasant dates and also some negative ones.

I carried on.  There were many dates that went well. I had a good time. I met some new, interesting people with the potential for romance perhaps developing later, and others with whom I became good friends.  Dating can be discouraging and exhausting and you begin to wonder “Is there such a thing as a real connection these days?”  The answer is yes, but if you are in a smaller dating pool like I am (older woman) it might take a bit longer.  That does not mean that you should settle.  Never settle.

It Sounds Too Perilous, Is Dating As A Widow Worth It?

My answer is an absolute yes.  Dating at any age is fraught with insecurities and emotions.  But you are special.  You have been through pain and survived.  So….

Take advantage of my experience and follow my ultimate dating guide for widows.

Use your common sense.

Love is risky but worth it.

I need to show that I’m a lone, fierce she-wolf.
– Selina Meyer (Julia Louis-Dreyfus) in “Veep”

For more information on dating after widowed, see these books available below: This post contains affiliate links for your convenience.  This means that if you click on an affiliate link and make a purchase, we may receive a small commission. This does NOT result in any additional cost to you, and the affiliate money we earn helps pay the fees to keep this site up and running – thanks for your support!